“We have two types:
1) for large formats and / or low speeds
2) for high speeds 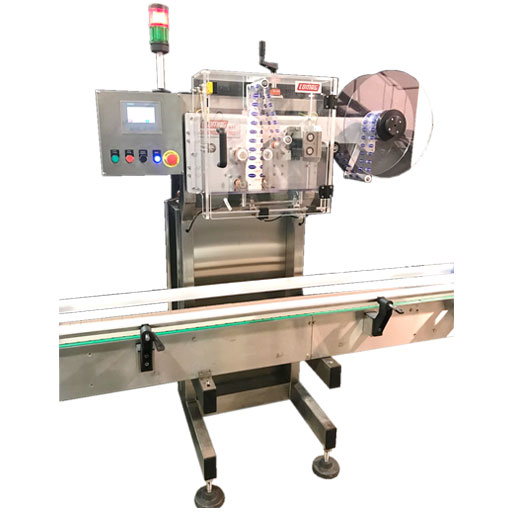 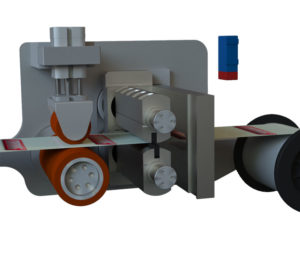 Differently to most of the shrink sleeve machines already on the market, our machine features an alternative solution to the traditional cutting of the sleeve by means of rotating blades.
The sleeve tubular, in its original flat form, is fed into a couple of parallel shafts with toothed blades that carry out the pre-perforation of the sleeve (transversal to the advancing direction) in the middle of the transparent zone typically left unprinted between one sleeve and the other or with registered print. The pre-perforated tubular is then opened by a very simple and light shaping mandrel, suspended on two pairs of rubber nip rollers actioned by electronic servomotors.The mandrel allows the use of sleeves with a minimum abundance compared to the perimeter of the cap, allowing savings on the raw material and on the energy consumption necessary for the shrinking of the seal. 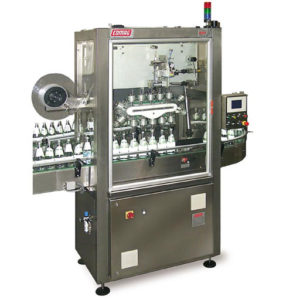 2) The TL for high speeds with continuous movement works through the following phases:

a. Feeding and continuous motion transport of the bottles on a conveyor belt;
b. Feeding, cutting of seals and their application on a carousel of pins that hook the sleeve from the inside, these pins expand mechanically in order to keep the seal open and in position;
c. Transfer to the neck of the bottle by means of a pusher which progressively pushes it downwards during its run, in perfect synchronization with the bottles in continuous passage.
d.The bottle is then sent to the shrink tunnel where the seals are shrunk on the neck of the bottle.
(See) 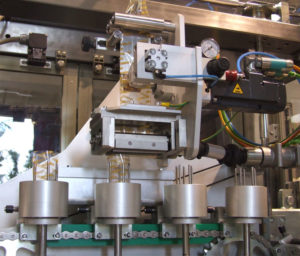 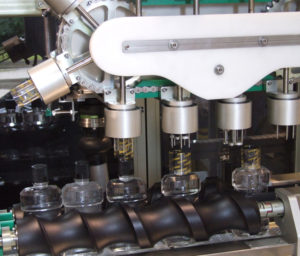